The ins and outs of MindManager Word importing – part A: standard Word documents

In my last post I discussed in detail a process I have developed to import a task list from Word into MindManager (MM). This process uses a unique feature of MM – when it sends a document the other way to Word, it applies its own versions of the Word’s formatting style as found in the Word template the user nominates for the export process. These include the equivalent of Word heading styles, but also some quite specialised ones as well.

One response I received commented that the post was hard to follow because I spent a lot of time explaining the background context on top of describing a fairly complex process. It was suggested that I perhaps could write another post, or series of posts, concentrating on and clarifying the steps involved.

Around the same time I responded to a question on the MM forum on how to import Word documents with hyperlinks appearing in the topics. This isn’t possible, but documents can be imported so that standalone hyperlinks display correctly in MM – ie, as hyperlink icons next to the topics by again using MM’s Word style formatting. I indicated that I would write the process up in more detail on this blog.

I’ve decided to combine these ideas into a series of three or four posts on using MM Word styles to assist in importing a range of Word documents. In this first post I’ll deal with importing “conventional” Word documents, in the second I’ll cover importing Word tables (updating some older articles I wrote coving this) and in last one or two I’ll revisit my recent post on the more complex task of importing task lists.

In this first article I’m discussing how to import a conventional Word document with headings, sub-headings and normal body text, but no tables. Please note also that I’m using Word 2010 and MindManager 16; different versions of Word and MM may yield different results.

You can import just about any such document from Word to MM but the question is how to get its heading structure to be reflected in the topic hierarchy of the resulting map. Unless the Word document is formatted correctly, everything in the map is likely to be flattened to the same MM topic level. This includes any text you might have wanted to appear in the topic notes – this text and any stand-alone hyperlinks will also appear as MM topics instead and the hyperlinks will not be clickable.

I’ll come to the various importing techniques in a moment but I’ll deal with formatting first. Only two approaches seem to work consistently as a basis for importing:

As for importing there are three alternative approaches which interact with these two formatting options, resulting in varying degrees of success in creating a topic structure which reflects the Word document paragraph hierarchy, as follows:

In summary, formatting a document with Word heading styles and either using the MM send button in Word or importing such a document from the MM end provide the best results. Both approaches however won’t display stand-alone hyperlinks properly in the resulting MM maps.

As I said at the beginning, MM’s unusual approach to exporting maps means that it creates its own versions of the Word styles which are sent to Word along with the exported document. Once these styles are in MM they can be used to format Word documents; MM can then read these styles and apply the relevant formatting when a Word document is sent the other way.

At this stage we’re using this feature to fix only the hyperlink issue, but I’ll be looking at how other MM styles can be used in future. It’s therefore probably useful to consider including other styles in the first step below:

Set up a Word document to send to MindManager

You can now set up the Word document you want to export to MM with the following steps:

As can be seen from these steps, the main limitation is that you can import only one hyperlink attached to each topic. MM can incorporate more than one hyperlink per topic, so this appears to a limitation of the import process.

The following table summarises what you can and can’t do with the various approaches to importing Word documents into MindManager. In the next post in this series I’ll explore how to use this technique to import more complex Word tables. 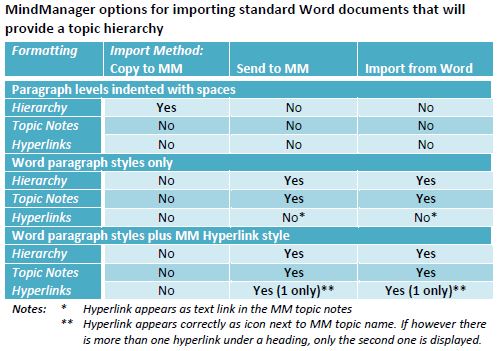 8 Responses to The ins and outs of MindManager Word importing – part A: standard Word documents