A lot has happened since my last post in May 2020, starting of course with the huge and continuing world-wide impact of COVID. Back in April last year I wrote an article for the MindManager blog with advice of non-government organisations (NGOs) on managing the impacts of the virus. I had no idea back then that in many countries these effects will last well into 2021, and beyond.

The release of MindManager 2021 in September 2020 was a welcome diversion, bringing a suite of new features, including topic info cards, accelerator keys, flowchart extensions and an enhanced MindManager Snap feature. Among the major changes was a major redesign of Word import and export and a completely new approach to slides, which I’ll come back to in future posts.

I also want to mark the sudden demise of the old MindManager Community Forum late last year. The forum was a great example of peer support, with experienced users volunteering their knowledge in response to thousands of questions from the wider MM community. Late last year the third-party providers of the forum software abruptly discontinued the service, which meant that all this information was lost.

I’m pleased MindManager has responded by starting a new forum, though I still miss the content of the old one – and at the moment I’m trying to recover some of it. More on that in the future, but one of the early questions on the new forum was about MM formulas and specifically whether it was possible to use them to make Time Value of Money (TVM) calculations.

Playing around with the MM’s seemingly modest formulas facility I discovered to my surprise that it is indeed quite capable of handling TVM equations. In addition, I stumbled across some significant but undocumented features which make formulas much more capable than they initially seem.

This two-part series is based on my response on the forum to this question and my additional research on formulas. My thanks to Jan Heger from MindManager who confirmed what I found and whose comments on the forum filled in some important gaps. In this first part I’ll look at TVM calculations and exponentiation.

First, what is the Time Value of Money? To quote Investopedia:

The time value of money (TVM) is the concept that money you have now is worth more than the identical sum in the future due to its potential earning capacity. This core principle of finance holds that provided money can earn interest, any amount of money is worth more the sooner it is received. TVM is also sometimes referred to as present discounted value.

Investopedia identifies the following variables as the building blocks of most TVM equations:

None of these are difficult to handle in terms of MM Topic Property number formatting. However, inputting the number of years presents an issue. Of course, you can just add this manually, but most people are likely to want to tie the number of years to specific dates; for example, they would want to estimate the value at a date in the future of an investment made today, or starting, say, on the first day of next month.

The most logical option would be to add dates as Task Start and Due Dates on a specific topic. Unfortunately, MM does not make these available directly to formulas in the same way Excel does – and while there are Date topic properties which you can enter manually, you can’t use these either in calculations.

The closest you can get is the difference between Start and Due Dates, as expressed as Duration (and also as Effort if you have set up resources). Both can be accessed in formulas; however, there is another twist – while these are available in units up to weeks and months as Task Info, formulas can recognise only the smaller units of minutes, hours and days.

You can use a formula to calculate weeks, months, or indeed years based on the duration in days, but the MAP add-in from Olympic Limited simplifies this process and also provides a range of date-related extended topic properties. MAP provides almost the full range of Duration and Effort options such as minutes, hours, days, weeks and months. You still have to calculate years, but this is easily done if you start with months. MAP also provides a number of other extended properties including Days to Task Start, Days to Task Due and Task Days Elapsed.

I decided to set up as a MM formula the following TVM equation which is used to calculate the future value of a sum of money invested over time. The general formula for this is:

My first step was to establish the value of t, the duration in years, from the extended property Duration Month provided by MAP by using the following formula (incidentally if you set up topic properties to match those used in the following equations you can copy and paste them directly into the formula box in MM):

The reason you divide by 13 and not 12 is that in MM “months” are four-week periods.

Then I added the following formula:

Similarly, the formula to calculate the present value of money is:

The formula to calculate a simple interest rate is:

The following map displays some examples using these formulas. Other TVM and financially related calculations are possible, demonstrating the ability of MM formulas to handle complex equations. 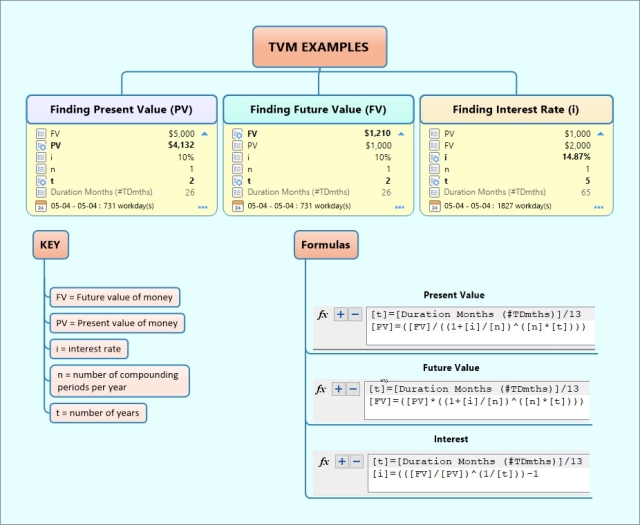 The success with TVM calculations prompted me to look more closely at the ability of formulas to handle exponents, in other words, squaring, cubing or raising the power of a number. In MM as in Excel you use the “^” symbol followed by the power to which you are raising the number. So, if you have the formula:

You can also use exponentiation to find, say, the square or cube root of a number – again, just as you would in Excel, by using a fractional exponent. So, for example if you have:

In the next part I’ll look at some of the hidden features of MM formulas – Comparison and Logical Operators.