So far in this blog I’ve looked mainly at end user applications, but this is not the only area in which Web 2.0 strategies are appearing. Another aspect which is also beneficial to councils, small businesses, NGOs and other organisations is the increasing use of Web 2.0 technologies and interfaces to provide masses of free statistical data and, perhaps more imprtantly, to make this information easier to use.

The provision of statistical information by governments parallels the development of the internet, albeit with a substantial time lag. Up to only a decade or so ago, most government data was available only in hard copy. Some material was on microfiche, or, if you were really lucky, on floppy disk and eventually CD – and you were often charged for the privilege of accessing it.

Eventually and somewhat grudgingly governments started making data available online, but usually in the form of static tables on websites or in PDF documents. Even where it was available in spreadsheet format, the size of the files and download speeds at the time often meant that CDs were still the best format for distribution – and there was little or no customisation.

This started to change with the advent of broadband. The advent of Web 2.0, changing community expectations and government attitudes have also combined with the emergence of third party providers to make this data much more available and accessible. There has been a dramatic increase in the data provided online by governments and they have (mostly) given up charging for it.

One of the oldest of these Web 2.0-influenced government sites and the one probably best known to Australian organisations is the Australian Bureau of Statistics (ABS). The ABS has made material available online for a long time but has made increasing use of Web 2.0 interactivity, especially since the 2006 Census, to present census information through a range of products.

This process has greatly increased the accessibility of census data and also brought down the cost, as many of these products are free. Thus small businesses, community organisations and even individuals can develop their own profiles of their potential customer base, service catchment area or local community without having to hire consultants or researchers.

The ABS products which show the most Web 2.0 influence include: 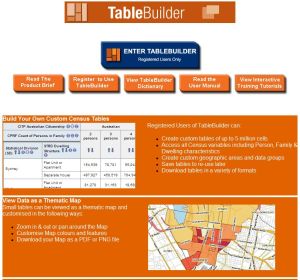 The ABS has just added substantially to its Web 2.0-enabled stable with the release of TableBuilder. This new online tool allows users to create their own tables of census data by accessing all variables in the census output record file for all ABS geographic areas. Users are able to prepare their own cross-tabulations and smaller tables may be exported or viewed as a graph or a thematic map within the product, whilst large tables can be downloaded to the desktop for further manipulation.

In effect, TableViewer combines almost all the features of the other ABS Web 2.0 census-based products – but all this comes at a price. TableViewer is a charged subscription service costing $1,655 (including GST). This price is for individual users for a “single Census reference cycle” and includes online training and ongoing help-line support.

TableViewer is a very sophisticated product which allows a much finer grain of manipulation of census data online by the end user than even CData Online does. Whilst a trial version is not available, the online and interactive Tableviewer tutorials provide a good idea of what the product can do and how it performs. 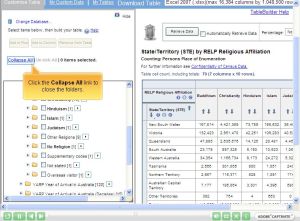 Whilst the ABS products provide a wealth of census information in an accessible format, a Melbourne company, .id (informed decisions), has taken Web 2.0 concepts a step further to produce a range of user-friendly interactive profiles. These I’ll take a look at in the next post.